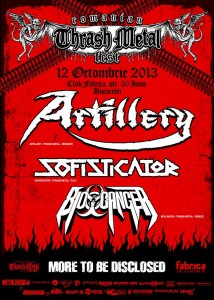 Romanian Thrash Metal Club has the honor of announcing the first bands billed for the second edition of the Romanian Thrash Metal Fest. The event had its debut last year, headlined by the British thrash metal band Onslaught, which played the historical album “The Force” (1986) in its entirety for the first time.

On the same note, this year, on October 12th, RTMC presents another benchmark band for the global thrash metal scene, this time for the first time in Romania. Artillery, the Danish heavy/thrash metal combo will headline the Romanian Thrash Metal Fest with a 90-minute show based mainly around the historical “By Inheritance” album of 1990!

With a unique stylistic footprint, a heavy and thrash metal mix that stamped the speed’n’thrash label on the band’s résumé, Artillery is one of the hallmarks of traditional metal. Formed in 1983 in Taastrup, Denmark, Artillery has an extensive discography. Besides the 6 studio albums there are a number of demos, singles, live records and compilations, released on tape, CD, DVD or vinyl.

Continuing the tradition of the club, Romanian Thrash Metal Fest, at its second edition, is both a platform for the promotion of thrash metal and the associated metal genres and a launching pad for younger bands associated with the scene. Thus, for starters, besides the Danish group we have confirmed two bands that, while still relative newcomers, have had releases that brought them to the attention of die-hard fans: Sofisticator from Italy and Bio-Cancer from Greece.

From Florence, Italy, Sofisticator came to life in 2009 and is dedicated heart and soul to old school thrash metal, with influences – openly declared by the members but also easily audible – ranging from Venom and Slayer to Overkill, Possessed and Exodus. The heavy, sharp patterns, complete with a voice reminiscent of a young Cronos, counterbalance the side of the band similar to what made Tankard famous in the 90s, labeled “frivolous” by some but readily enjoyed by connoisseurs. Titles like the 2012 album “Camping the Vein”, obviously paraphrasing the famous “Tapping the Vein” Sodom record, or tracks like Total Flatulence War ( Beans Attack ) and “I Wa’ sborr ’To Rock’n’Roll”, and of course the name of the band itself, make Sofisticator an exuberant band that promises an experience never seen before in Romania.

Formed in 2010, in Athens, Greece, Bio-Cancer is not far from the other peninsular band, described above. Although musically oriented towards the darker, more aggressive side of thrash metal that spawned bands like Kreator, Morbid Saint, Demolition Hammer and the more recent Violator, Bio-Cancer manages to combine the obvious penchant for violence with crossover visual and stylistic queues that place it amongst fun- and scandal-loving bands. This time the humor is more on the morbid side, evidenced by tracks like “Get Cancered … Now” and even the album title, “Ear Piercing Thrash”, and it suggests the nefarious intentions of the band, regarding the audience. You have been warned!

Romanian Thrash Metal Fest 2013, The 2nd Edition, will take place Saturday October 12th, at Club Fabrica (11 Iunie Street, Bucharest) with a line-up of up to 10 bands that will be announced in the following weeks.
Information regarding tickets and running order will be announced soon, with the entire line-up to be gradually presented to the public, in the order of the confirmations, in a time convenient for those that want to know in detail what they are getting themselves into by buying a ticket!
Romanian Thrash Metal Club members have free access.
Romanian Thrash Metal Fest is a RTMC event supported exclusively by the club members.