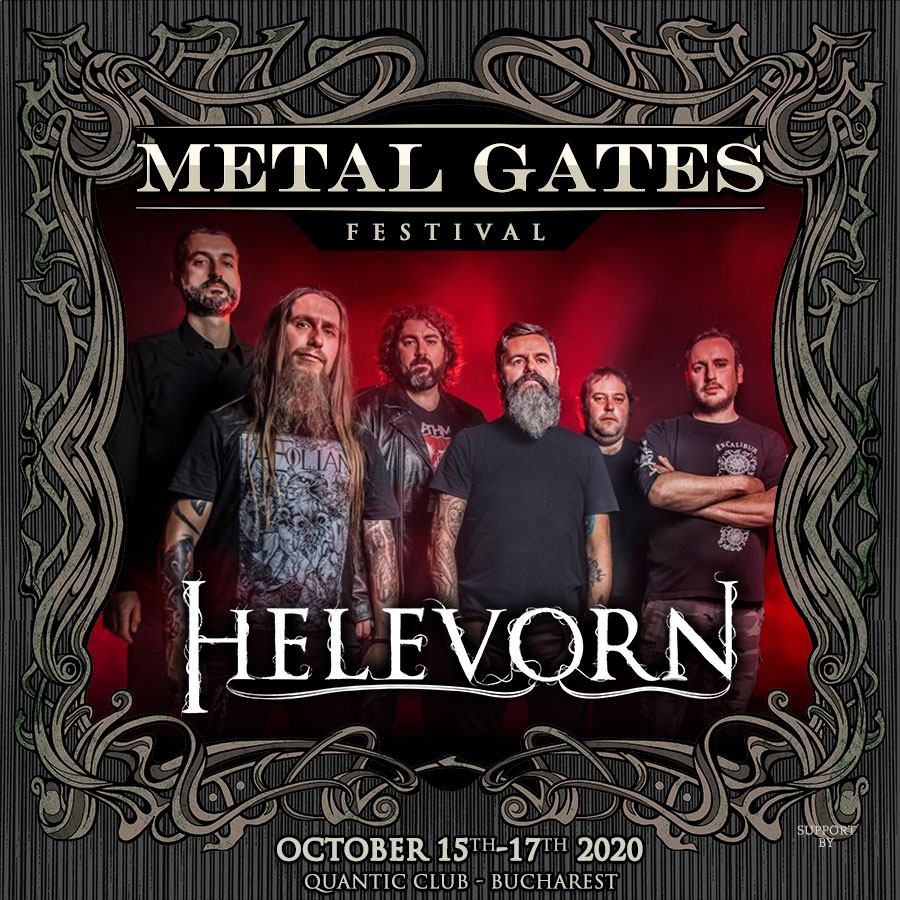 Helevorn is joining the Metal Gates Festival lineup, returning to Romania after 5 years, and a new album released in 2019!

The band started in 1999 in Palma (Mallorca, Spain), with Samuel (guitars), Josep (vocals) giving the first steps and completed the actual line-up with Xavi (drums), Kike (keyboards), Sandro (guitars) and Guillem Morey (bass).
With the first finished songs they recorded a promo cd called “Prelude” in winter of 2000. It was their presentation letter, written with a Gothic-Doom style with female vocals, reminding bands like TRISTANIA or THEATRE OF TRAGEDY, and with a very good acceptance in the underground press.

After few years of intense work, the band worked with new songs, and they decided to record it at Ona Digital Studios (Mallorca), and mastered at Finnvox Studios (Finland) by Mika Jussila. The final result was a new Cd called “Fragments”, self released in October 2005, sounding more solid, and get also transmit a dark, heavy and melancholic sound. “Fragments” has obtained excellent reviews in several Metal Magazines, then, HELEVORN was touring around Spain since November 2005 in cities like Madrid, Valencia, Alicante, Burgos, Tarragona, Valladolid and Guadalajara.

The band was asked to appear on “December Songs” a tribute to Katatonia, released in December 12th 2006 by Northern Silence Productions.

In November 2007 the band toured with SWALLOW THE SUN in their first Spanish tour including one gig in Portugal, then, Helevorn had the privilege to play at Dutch Doom Days 6 (Rotterdam, Netherlands).

The russian label BadMoodMan Music released the album on February 2010, getting excellent reviews, making the band to introduce themselves into the international scene, forming part of one of the most important festivals in the gothic music and culture, the Wave Gotik Treffen (Leipzig, GER) and Devilstone Open Air (LT), Patior Ergo Sum (Prage, CZE), Madrid is The Dark Fest and playing again at Dutch Doom Days X (NL). Also in 2011 the band played in Barcelona with MOONSPELL in their european tour.

The 22 of september 2014 the band releases their new third album entitled “Compassion Forlorn” (edited again by Solitude/BadMoodMan), recorded and mixed at Psychosomatic Studios by M.A. Riutort and mastered by Jens Bogren. Eight tracks full of human decay from our most deepest sentiments, composing an album that has returned the meaning of an evolution in the compositions and in the band’s sound reaching excellent reviews and placing the band in a good position in the Doom Metal worldwide, also thanks to the “Burden Me” video release.

And it’s been during the summer of 2018 that the band has recorded its fourth full-length album, doing the same formula as the previous one (Psychosomatic Studios with M.A Riutort + Jens Bogren mastering the disc). The result is ‘Aamamata’, that is the song that Death sings every day in the Mediterranean Sea, which has become a desolate pit for human lives. The album is going to be released on January 23rd of 2019 again with Solitude/BadMoodMan. It’s a bit more epic, more intense and it keeps the personality of the previous albums. The contributions have been great. Heike Langhans of Draconian has sung in a song, like Júlia Colom, and Jaume Compte played the bouzouky and baglama. Guitar solos played by Pedro Zubiri.
It’s definitely the best music that the band has ever composed.